WORKSHOP ON REVIEW OF ORGANIC STANDARD

You are here: Home1 / Projects2 / WORKSHOP ON REVIEW OF ORGANIC STANDARD 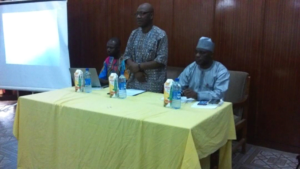 WORKSHOP ON REVIEW OF ORGANIC STANDARD

The workshop was held at the Board room of the University of Ibadan Conference Centre on the 15th of February, 2018. It was organized by the Ecological Organic Agriculture Initiative in Nigeria in collaboration with the Association of Organic Agriculture Practitioners of Nigeria. The workshop‘s main objective was to create awareness on Organic Agricultural practices, the standard of Organic Agriculture and the review. Representatives of government agencies, stakeholders were invited, among whom were Dr. Sani Mayaki and Dr  Mudashiru of the National Agency for Food and Drug Administration and Control, (NAFDAC), Mr. Adeseko A. Michael of the National Agricultural Seed Council (NASC).The President of Association of Organic Agriculture Practitioners of Nigeria, Prof. V.I.O Olowe, the Vice President of the Association, Dr. Olugbenga  AdeOluwa were present as well.  Prof. Olowe while giving the welcome address pointed out the need for review of the standards of Organic Agriculture. He implored the stakeholders to also join in the review process. The Vice President also proceeded to give the overview of the Organic Standard. In the course of his lecture, Dr AdeOluwa stated that Organic Agriculture simply means authentic agricultural practice, cultivation based on integrity and this must be proven, he further stated that certification is the seal either by the government or private, standard is the auditing of the whole system.  He however added that there is an organic Control Tower/ Monitor put in place, worldwide which is usually a transparent venture. He categorized certification into three:

The history of Organic Agriculture dated back to 2009, when the first draft of a simple standard for producers were made, while in 2010 there was the approval of first simple standard for stakeholders. Though major issues bothering on the 50 meter buffer zone, which was said to be too much considering the environmental factor, the provision of organic fish, livestock, processing, components and handling which cannot bypass NAFDAC were raised. The workshop was an interactive one and during the lecture, Dr. Mudashiru of NAFDAC made a comment on the buffer zone as some participants at the event wanted a review of the 50 meter range, she stated that the range should be left as it is, as the statutory body has the facility to arrive at such range. She suggested that stakeholders should be put to adhere to the standard and comply with the 50 meters buffer zone rule. The workshop proceeded to the syndicate session where they were grouped into General, Crop and Livestock/Animal Husbandry syndicate. At the aquaculture session, it was pointed out that certain practices could compromise the organic agriculture standard, example is the change in the sex of the fishes to allow for more production. At the end of the three  sessions, Dr. Sani Mayaki of NAFDAC expressed his interest in Organic farming and the need to communicate  Organic farming to NAFDAC. He added that the world is diving towards Organic Agricultural practices and that the Association should create more awareness and constitute a powerful force and promised to raise the issue of the incorporation of Organic Agriculture into the curricula of NAFDAC, as it is yet to be in their agenda. The NAFDAC boss induced the Associations intention to write a formal letter to NAFDAC as a statutory body in charge of Organic Certification in Nigeria. There were a lot of brainstorming at the workshop before it was finally brought to a close.

Want to join the discussion?
Feel free to contribute!